Journalist Eddie Brock is trying to take down Carlton Drake, the notorious and brilliant founder of the Life Foundation. While investigating one of Drake’s experiments, Eddie’s body merges with the alien Venom—leaving him with superhuman strength and power. Twisted, dark and fueled by rage, Venom tries to control the new and dangerous abilities that Eddie finds so intoxicating.

Late 2007, in an old communist building in a freezing Bulgaria, I met a guy that was keen to know about my tattoos, and more about how I found myself to be in Bulgaria working on a movie starring Morgan Freeman and Antonio Banderas. This was my first meeting with Tom Hardy. Since then I’ve been proud to have watched his rise through the ranks to become one of the most prolific actors of my generation. So, when I got the chance to work with him again it truly was a double take, not only that we’d be working together once again, but that he’d be doubling up on his acting duties by playing both Eddie Brock and the titular symbiote Venom.

THE TEAM
Another creative genius, DP Matty Libatique was to lead the camera department into battle with a great crew, predominantly from Atlanta, Georgia including; gaffer, Dan Cornwall and key grip, Kerry Rawlins.

My A camera key first AC was John Holmes, and our 2nd AC, Joey O’Donnell are both California exports, although Joey is an Emerald Isle export thru and through!

The director, Ruben Fleischer was sure to maintain a strong human relevance to the story especially with Eddie and Anne’s (Michelle Williams) relationship, and also kindly shared many stories from his time producing and directing Rob Dyrdek’s Rob & Big! 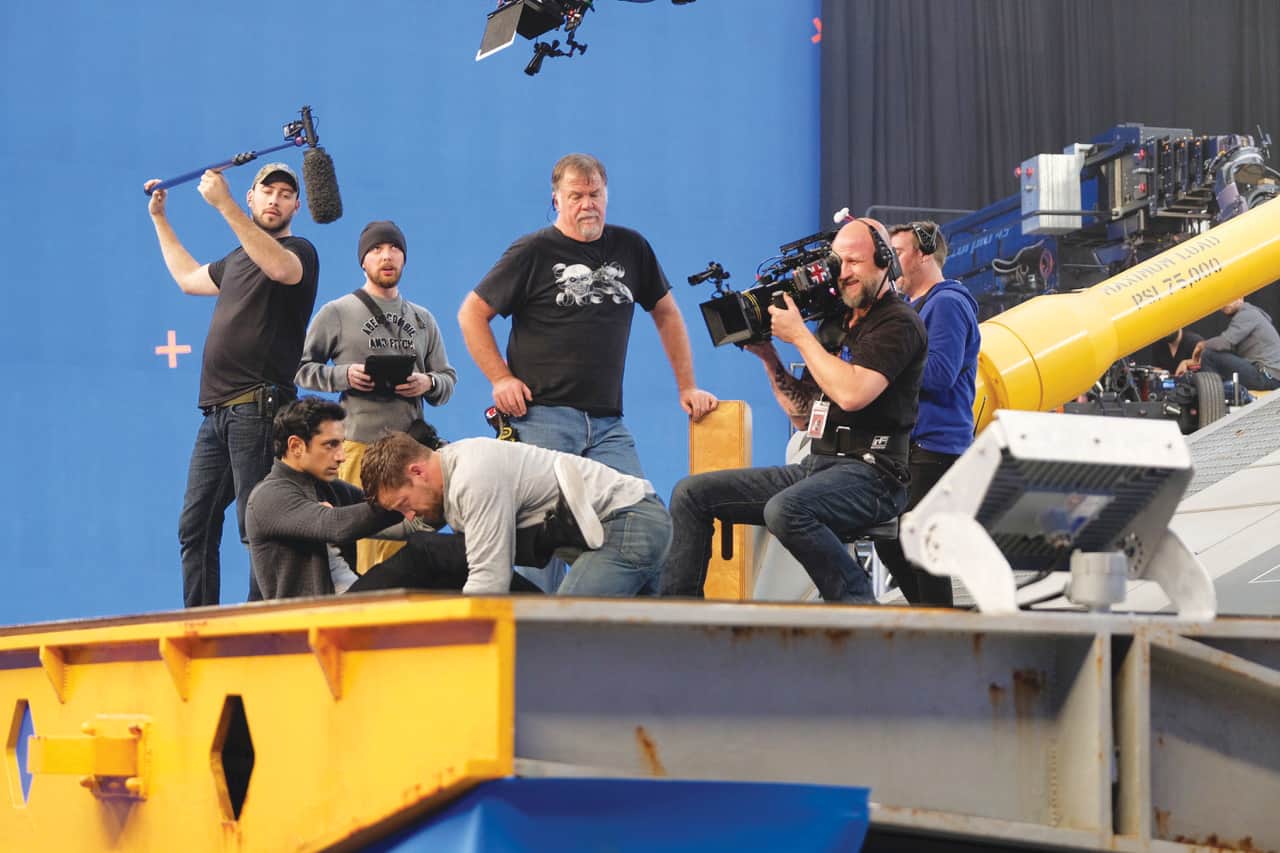 Shooting the fight between Eddie and Carlton as they morph into Venon and Riot. Photo by Frank Masi

DIVING IN
The first major sequence we shot was on stage at Black Hall south of Atlanta, was a San Francisco apartment belonging to Eddie Brock (Tom Hardy) where he has the realization that something is wrong and that something has possession of him.
We shot 3/4 cameras on the scene and Matty Libatique was able to fully utilize angles for most action coverage. So, there was a mixture of Steadicam, Movi, fluid head operated and locked off cameras.

Our B camera operator was Michael Watson who brought game to the shoot and was always in tune with my thoughts for the narrative to embellish Matty’s own thinking and Stewart Smith came in to for additional camera days.

I also employed the Betz Twister for some quick hand-held shots which enabled me to quickly whip pan the camera with ease–the Twister sits on the docking pin of my GPI Pro Atlas Arm so it still has a degree of ‘Steadicam’ stabilization. I had used the Twister first on Godzilla: King of Monsters for close quarters inside an Osprey helicopter with the Arri 65.

I was excited to learn that Matty was going to bring Chris Herr, his Movi tech from Los Angeles, they had collaborated previously on Straight out of Compton and A Star is Born. 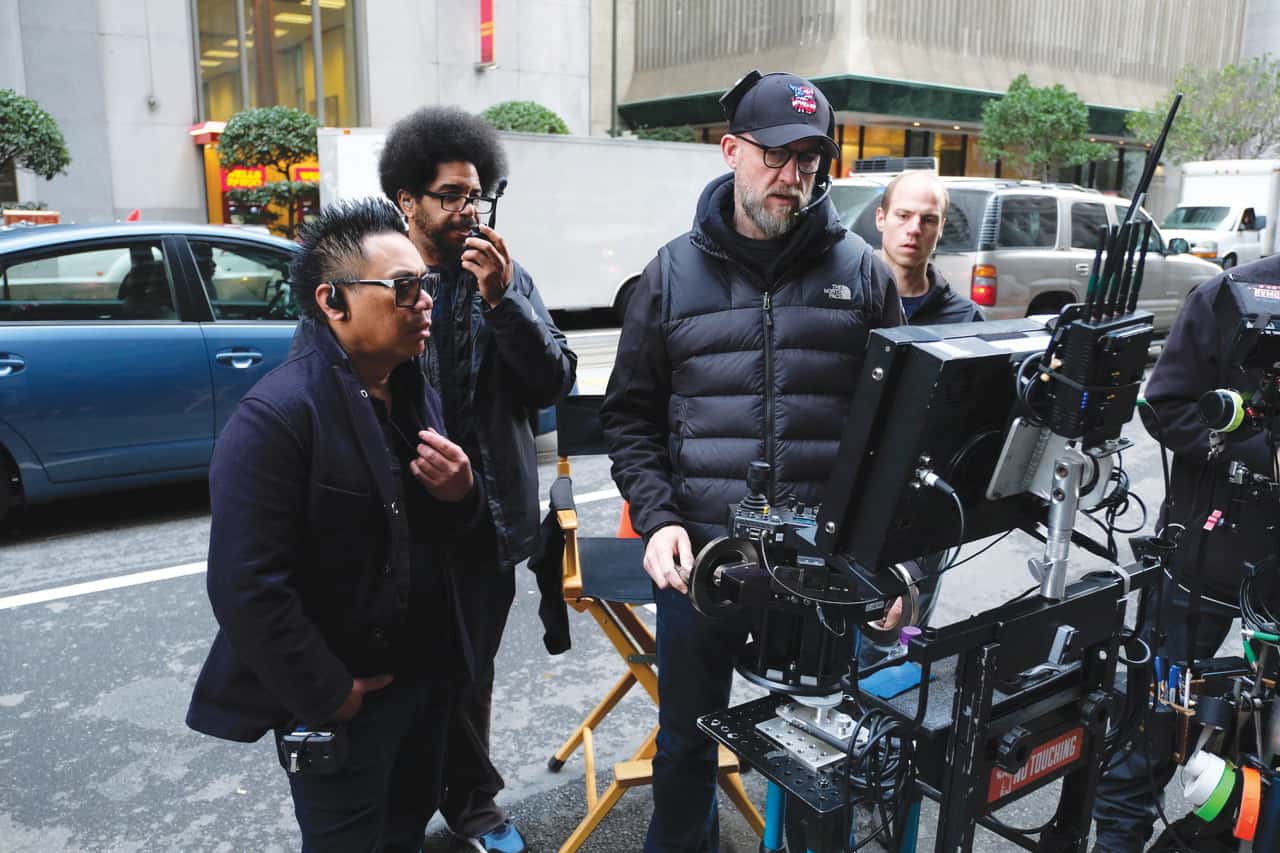 Working the wheels for the MoVi. Photos by Frank Masi

HOW WE USED THE TECH
I’ve fought the battle, as most Steadicam guys have been doing and are still doing, in accepting the Movi/Ronin2 Gimbal Stabilizers into our arena of camera stabilization and movement–I felt that I was going to be educated properly in applying in its viability with Matty and Chris. After observing their relationship with regards to how Matty wanted to use the Movi / Antigravity rig for certain situations, the language he wanted to use started to make sense.

Chris Herr adds, the Freefly Movi gimbal was applied in a variety of unique ways on Venom, showing how versatile of a tool it can be. It served as a stabilized hand-held for doing quick movements as Venom threw people around the room. Weighing in at around 25 pounds we were able to do some really quick moves that followed Venom’s rapid and long distance fighting style. We combined the Movi with the AntigravityCam from Cinema Devices to give us a huge range of motion to cover anything from a small symbiote crawling on the ground to a nine-foot tall Venom in his final form. In the scene where Carlton Drake is conducting an experiment on a human subject, we used the AntigravityCam’s floor-to-ceiling boom range to follow our symbiote out of its tank, onto the floor, across the room, and up our actor’s leg. We were able to pick up this shot without extensive pre-planning, Lambda heads, or laying down a dance floor. 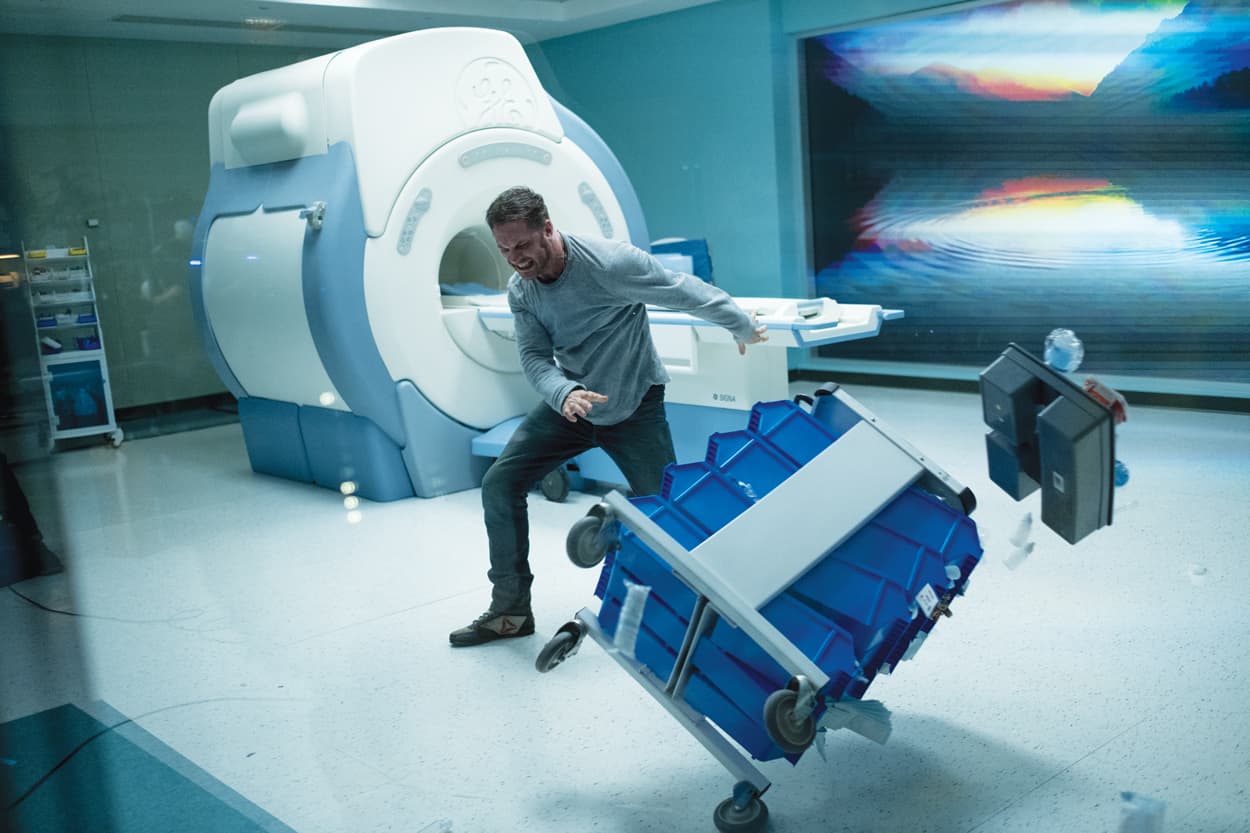 Tom Hardy on the set of VENOM. Photos by Frank Masi

MOVIE MAGIC
On various occasions we used the Movi with the Flowcine Black Arm mounted to a dolly to get long tracking shots without having to lay track. We weren’t restricted to one axis of movement and maintained the precision of movement that a dolly offers.

The Movi also served as our remote head for jib work, and as a small hot head we could hide in corners or deeper in the set where we couldn’t hide an operator. The Movi and antigravity vest came in handy shooting Eddie Brock walking through uneven terrain in the woods. I used the 1A Tools Alpha wheels to remote operate the head as I moved it through our set focusing on the camera path and obstacles on the ground.

Using the Movi with Chris and Matty in a true narrative form convinced me to add the DJI Ronin 2 to my own folio of equipment. I decided to get serious with the auxiliary equipment and have DJI MasterWheels, Force Pro, ReadyRig, and a GFM Mini Stabilizer arm as well as many plates and accessories provided by Pedro over at Cinemilled.

We probably used Steadicam and Movi on a Par, it was interesting to see that my choice of tool was in tune with how Matty thought about setups. 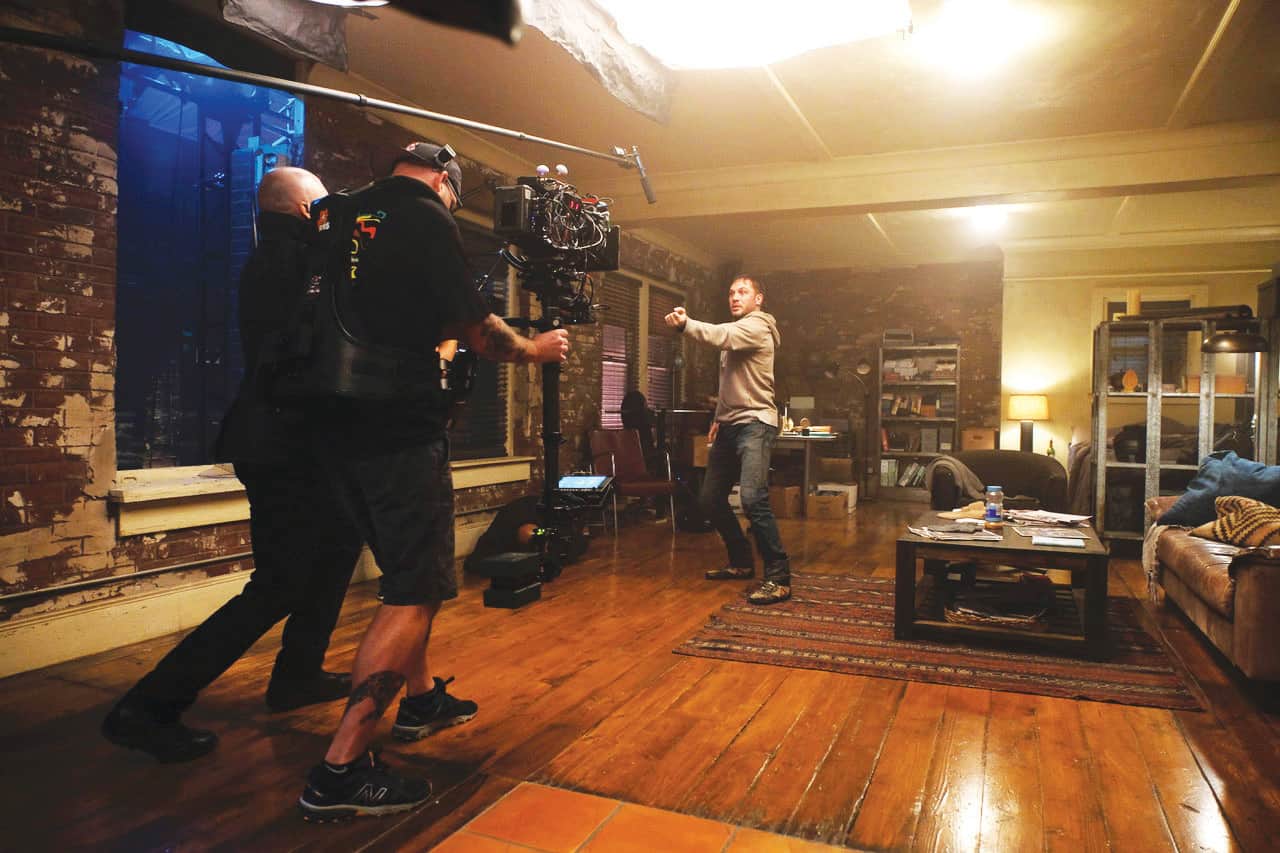 HOW I GOT THE SHOT
The reveal of the symbiotes as Carlton Drake (Riz Ahmed) opens the back of his secured armored vehicle was easily attained by an under slung slider and the Movi. Although the Movi was deployed faithfully, Steadicam was the application for exposition and transportation along with a technocrane and libra head.

While Eddie Brock struggles with Venom in the morality of being a host for a violent alien lifeform he walked the streets of San Francisco regularly throughout the movie. Using the MK-V Infinity base system came in useful for its lighter setup with the ARRI Mini and sometimes for maximum stability I’d use the Betz Wave and the Back Stage Shotsaver Dolly for long takes with quick turnarounds.

Tom preferred to get into a rhythm and flow carrying two characters along the street so therefore we’d quickly reset and go again.
Tom Hardy brought the symbiote character Venom to life by puppeteering Eddie Brock in all of the scenes, he’d pre-record the
Venom’s dialogue and then acted against the playback of Venom in his ear while in the Eddie Brock character. So, therefore it was important to always be wearing production sound so that you would hear both the characters and be able to anticipate what Tom (Eddie) might do with regards to his internal reactions to Venom’s ridiculous ideas.

We also used various stabilized heads other than the Movi. Generally, we used the Libra for normal crane and traveling shots, but we also used the Occulus head for programmed moves with the Scorpio Arm. We applied this for the scene in which Venom wipes out the control room in Carlton Drake’s launch and experimental facility.

We also used the Movi and Libra for sequences on the dolly and tracking vehicles–when using the remote head on a dolly it allows for smaller areas and easier maneuverability–enabling my dolly grip, Alan ‘Moose’ Howery to quickly move the dolly around the smaller spaces.

We shot a mix of spherical and anamorphic lenses–depending on whether Venom would be a part of the scene, which would allow us to make room for his physicality in frame.

It was a pleasure to work with a great crew across the board in Atlanta and San Francisco and excellent to catch up with alter ego of Venom.

McGuire made a commitment to focus on Steadicam, and following that route he worked for nothing on several short films.  Getting as much experience and flying time as he could in the rig enabled him to move slowly but surely into his big break working on Harry Potter and the Order of the Phoenix.

Since then, McGuire been lucky to have worked on various motion pictures here in the USA such as; Godzilla: King of Monsters, Jason Bourne, American Made, Pitch Perfect 1 – 3, and he is currently shooting The Terminator Reboot in Hungary.

McGuire is especially grateful to be a member of the SOC, and he was also the recipient of the SOC’s 2015 Camera Operator of the Year – Television. 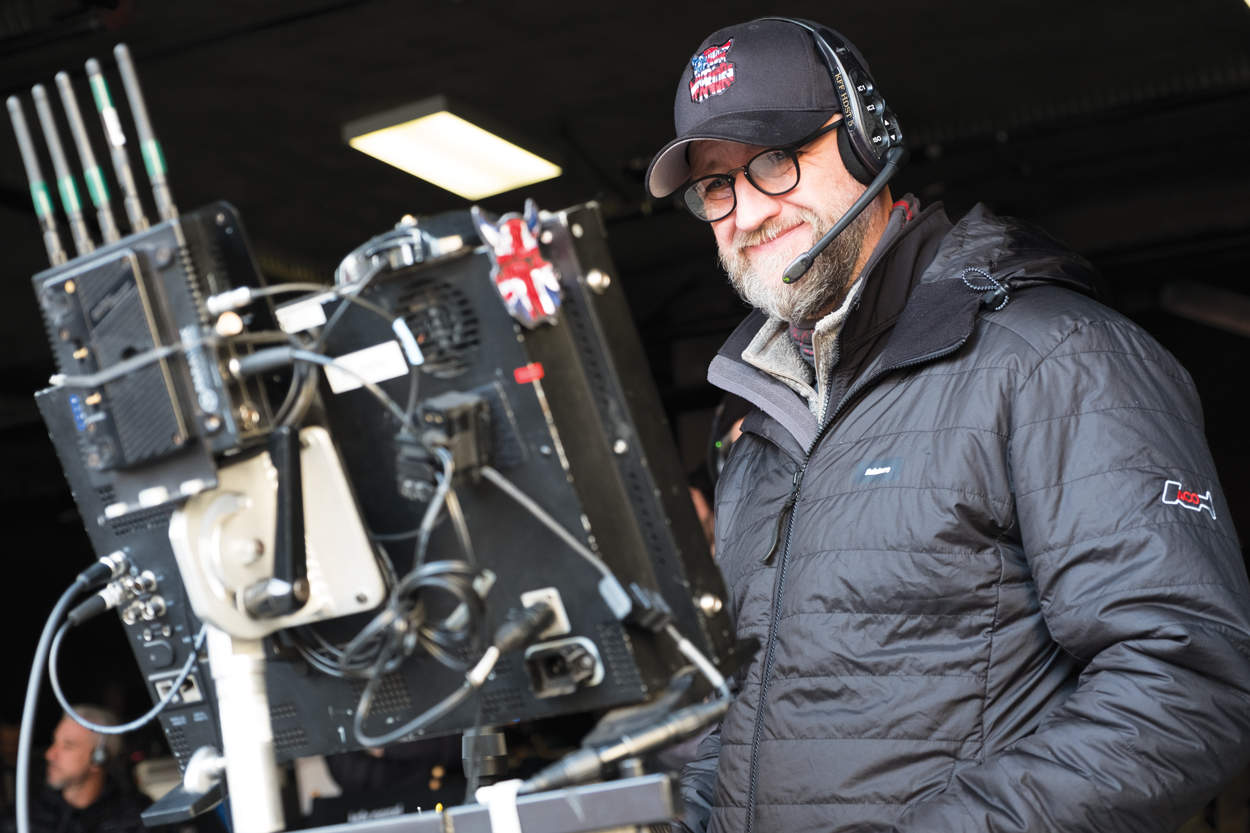