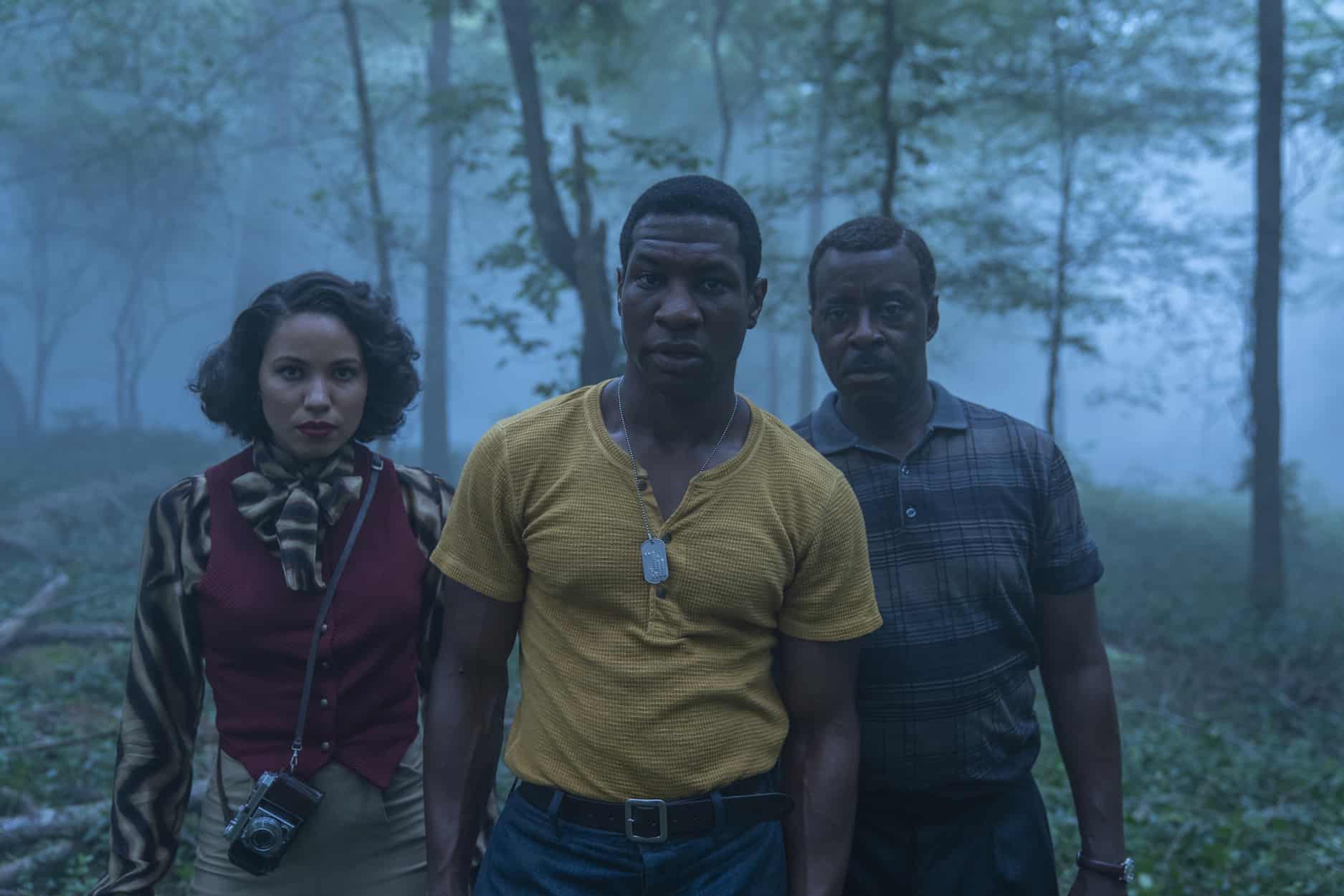 Lovecraft Country is an American horror drama television series developed by Misha Green based on the 2016 novel by Matt Ruff. Starring Jurnee Smollett and Jonathan Majors, it premiered on HBO August 16, 2020, and is produced by Monkeypaw Productions, Bad Robot Productions, and  Warner Bros. Television Studios.

The series is about Atticus Black, who in the 1950s travels across a segregated America in search of his missing father and, in the process, learns of dark secrets plaguing a town on which famous horror writer H. P. Lovecraft supposedly based many of his fictional tales.

I’ve been a camera operator since 1987 and a member of the SOC since 1998. I got involved in this series with the help of a producer, Dana Robin, with whom I had worked with on several movies over the years. Dana called and said that he was doing this show, and would I be interested and available. He set up a meeting with the DP, Rob McLachlan, ASC/CSC. I had never worked with Rob before, and was excited to meet him. Rob is fantastic to work with. He’s a veteran cinematographer who knows what he wants, how to work with directors, and how to bring out the most in his crew. The one thing that Rob asked me during the interview that stood out was, “Do you make your job look easy?” Rob was extremely relaxed and laid back himself. He seemed like he valued a relaxed energy on set and that he knew I had sufficient experience to do the job, but wanted a camera operator who was relaxed, confident, and did not make himself the most important person on set. Being a “team player” is one of the most important qualities for me to strive for as a leader of a department. I told him that. By the end of the interview I wasn’t quite sure how my response went over, but a few days later I received a message from Dana that Rob wanted me on board.

Lovecraft Country had an extremely ambitious schedule, and so they used the talents of two DP’s—Rob McLachlan and Michael Watson. Rob was what you might call the “primary DP,” and he set the tone and look for the series. But Michael came in and not only matched Rob’s look, but also brought his influence in the most complimentary of ways. When you look at all the episodes you will be hard-pressed to see a difference in look or style between them. That is a testament to Michael Watson who had “big shoes to fill” in keeping with Rob’s masterful cinematography.

We shot on Sony Venice cameras, with Zeiss Supreme Primes in full frame, 6k format. The high resolution was important in terms of giving this very VFX intensive show a strong palette to work with. We also carried a Maxima head, and a Mosys L40 remote head. We used these tools consistently throughout the series.

I would like to mention A camera 1st AC, Stephen Early. Stephen is not only a very talented focus puller, but he is also a very enthusiastic participant in the overall process. Not only does he manage the department well, he was often there for me as an additional set of eyes and ears, keeping me aware of things I might have missed. He, along with his team, Cory Blake and Kyle Ford, kept the always-changing equipment flowing without incident—and I should also mention—they kept us hydrated, caffeinated, and fed! The rest of the camera crew consisted of Bill Saxelby, B camera/Steadicam operator; Keith Pokorski, 1st AC on B camera; 2nd ACs, Nicole Castro and Lauren Gentry; DITs, Manuel Smith and Nick Kay; and set photographer, Joshua Eli Adé. 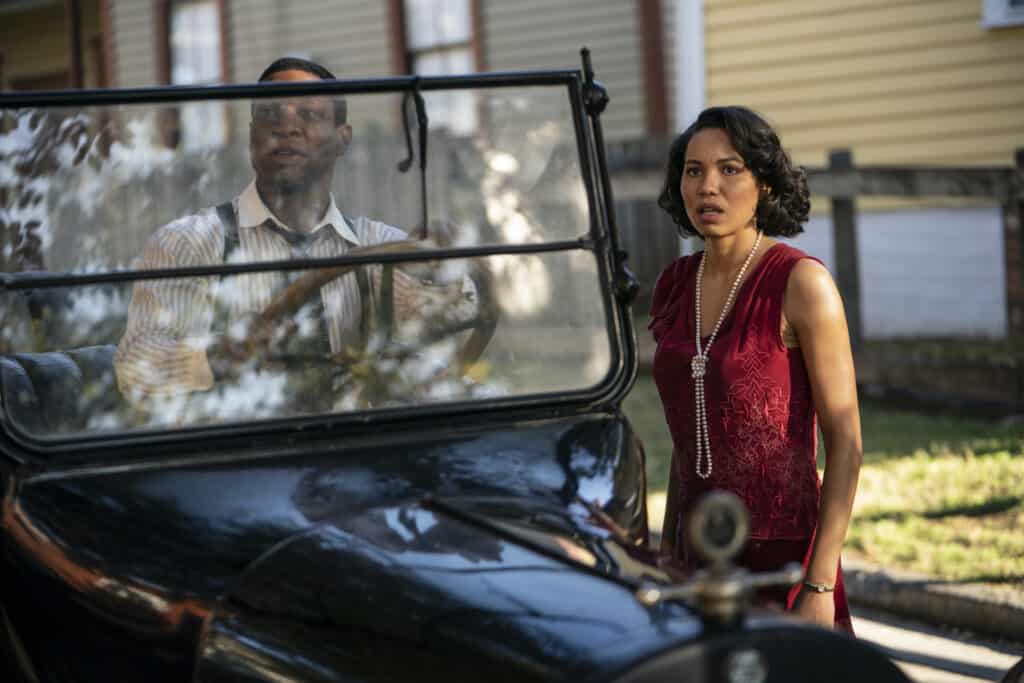 THE STYLE, LOOK AND FEEL

Although I was not involved in forming the style or look of the show, Rob and Misha Green had a very well thought out concept, and that was communicated to every department. Misha—the writer, director, and showrunner—had this very determined and spirited plan that she brought to the table every day. And she was there, with us, in the trenches every single day (and night!) Rob and Michael were thoroughly supportive and dedicated to her vision, as was every department. That’s what really stood out to me, how every department was so dedicated not only to the visual execution of the show, but also to what the show was trying to say.

HOW WE GOT THOSE SHOTS

We did a lot of shooting with the Technocrane, with the equipment and crew provided by ProCam. The show also had a fair amount of Steadicam, which was operated beautifully by B camera/Steadicam operator, Bill Saxelby. There is also a significant amount of hand-held work, especially during action scenes, arguments among characters, or just to create a slight “uncomfortable” feeling for the scene. Often we would use the Sony Venice Rialto—the stripped down, ultra-portable body for this.

For the scenes in Episode 4 that take place in the water tunnel, the DP Rob McLachlan, along with key grip Seth Greenwald, best boys Arnaud Pieny and Alfredo Denila, and dolly grip Ralph Scherer, all came up with an extraordinary shooting platform. With two boogie boards they made a small catamaran with rudders for stability, and a platform in the middle to which we mounted Rob’s wireless stabilized Maxima head. As the catamaran was maneuvered through the water by dolly grips, I was able to operate remotely from the set above and communicate with them via wireless headsets. For the most part I was able to stay dry, but—to be honest—I  felt a little left out because I could see all the fun the boys were having playing in the water! This system worked better than any of us anticipated, and was a very efficient way to shoot the scenes.

Although we did shoot in practical locations, like the big house that the main characters move into, we also had some truly magnificent sets. Created by production designer Kalina Avanov, these sets were just spectacular, and offered the ability to shoot from any position we wanted. A healthy budget and great attention to detail was given to the set design, props, and set dec departments—all of which came together beautifully.

For the episode that takes place in 1921 Tulsa, Oklahoma, we shot in Macon, shut down two blocks, and re-dressed the storefronts to create 1921 Tulsa. Fires were burning everywhere, and we shot with several small practical fires spread throughout the street, which were then embellished by visual effects in post.

And speaking of visual effects—that team led by Kevin Blank and Robin Griffin had a tremendous amount of work on their plates (pun intended), and they contributed an incredible amount to what you see in the final edits. Kevin and I have worked on several projects together and have a great relationship. I would constantly check with him on VFX needed from us, and he, in  turn, was willing to share his ideas, plans, and storyboards for what we were about
to shoot.

Aside from some occasional high-speed work and a lot of smoke in the atmosphere, we rarely used specialty devices. For scenes involving flashbacks we did use swing and tilt lenses, and a CineFade shutter/iris controller was used for a complicated shot in Jurnee’s bathroom where Rob wanted to keep focus in one spot, but alter the depth of field during the shot to include another character in the deep background. For another shot, Rob placed some old space heaters in front of a telephoto lens to create a hazy, “hot on the street” effect. Occasionally, we would mount the Maxima remote head on the dolly along with a stabilized arm, and this would work quite well for long walk-and-talk scenes, or for shooting in tight sets. Our dolly grips were Ralph Sherer on A camera, and Tripp Pair on B camera. 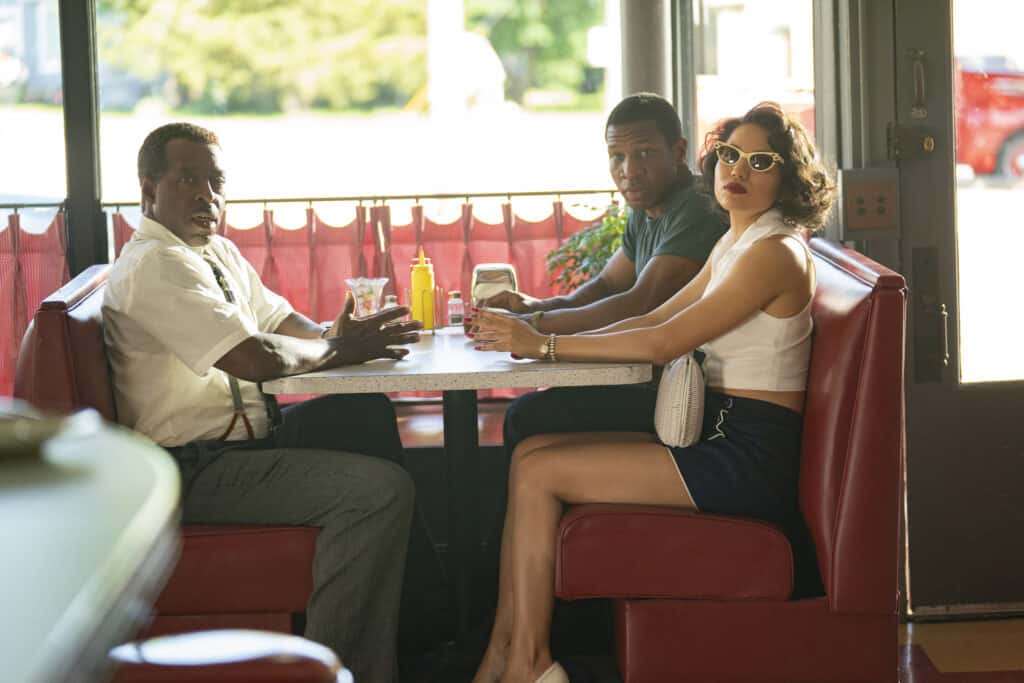 It is hard to describe how hard the actors worked on this project. Every day the intensity level was at max. You really got the feeling that this was a very personal story for the actors, and with that came a seriousness, or concern for authenticity. That is not to say that the cast was not friendly or respectful. Quite the opposite, as I felt a strong, personal connection with them, and in the moments when camera was rolling I tried to be very sensitive to their craft, which in turn was reciprocated by them to us. After almost every take, I would look up and there would be eye contact from the cast to see how I felt about what had just been shot.

There was a sense of “we want to make sure everyone got this right.” Jonathan Majors, Jurnee Smollett, Michel K. Williams, Courtney B. Vance, Anjanue Ellis, Wunmi Mosaku, Jamie Chung, Jamie Neumann, Jordan Patrick Smith, Abbey Lee, and a young Jada Harris all came in with an amazing work ethic, which overflowed to the crew. And I think it shows in the series.

This show for all of us involved was an important one. Lovecraft Country is an allegory of mixed genres, mixed messages, and was created by a crew of mixed races. Yet we all came together to help Misha Green and HBO tell this very complex, and ultimately entertaining story that was set from the start to have very high expectations. Expectations for the filmmakers to create such a complex drama, and expectations for the audience to receive that complex message. For me it meant an eight-month journey into another world. I loved every minute of it and I can say that I feel proud to have contributed to Lovecraft Country, and to have had the opportunity to work alongside so many talented people in telling this story that includes our history, some fantasy, and a statement about how we approach our future.

Bob Gorelick, SOC, started his career in New York City in 1981. With aspirations of becoming a cinematographer, he worked his way up the ranks as a production assistant, film loader, 2nd assistant, 1st assistant, and eventually became a Steadicam operator and conventional camera operator. Bob credits Todd Crandall, Joe Ritter, Mitch Dubin, Clyde Bryan, Rob Draper, Michael O’Shea, Luciano Tovoli, Larry McConkey, and Ted Churchill as people who have greatly influenced and helped him during his 40-year career. Bob has been a longstanding member of the SOC and Local 600. He would like you to know that he is still at it, and always looking to work with talented filmmakers. 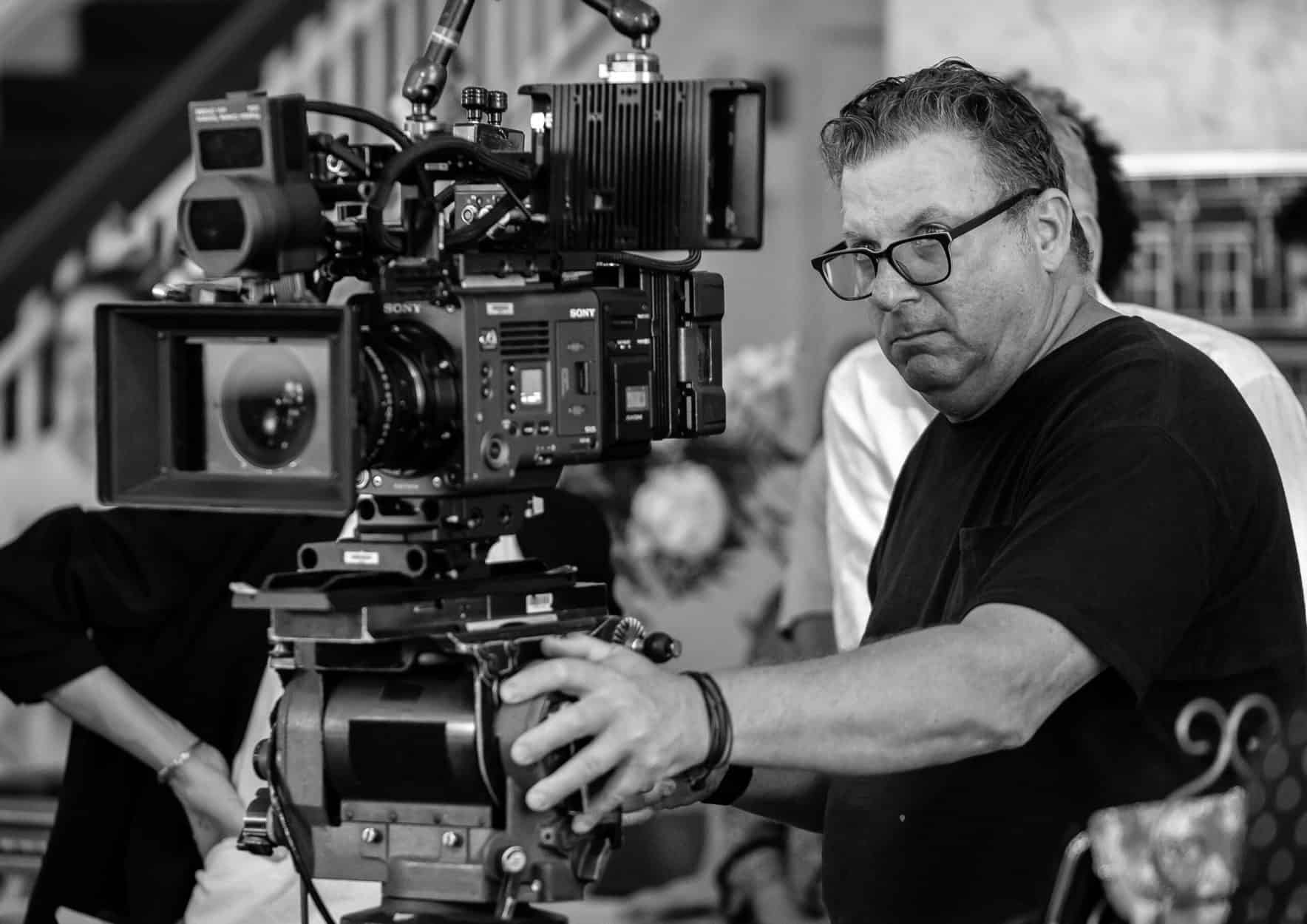